Last Friday, June 8th, the present Electricfor team - a specialist in the design and production of electric heating elements - and retired workers met at the 4 Vents restaurant in Terrassa to celebrate the company's 100th anniversary.

During the meeting, a commemorative video was broadcast reviewing the history of the company, from its beginnings to the present day. Electricfor has been, since its inception, a family business that has always been recognised by a system of values, which have become the essence of the company. The company's core values include respect, commitment and team awareness, which have made it one of the best-specialised companies in the sector.

Experience and quality at the service of all its customers

Electricfor's expertise and know-how, which always offers the right solution for each project to its customers, have also helped to consolidate its presence - after 100 years of history - in the international market with its subsidiary in India and a chain of distributors throughout the United Arab Emirates, Romania and Chile.

It is also worth mentioning its trademark, CFOR, through which Electricfor markets its equipment and electric heating elements, which are used in many industrial sectors and which are guaranteed by its R&D department responsible for the design and production of all its products.

In short, a company that throughout its 100 years of history has consolidated itself in the national and international markets and has been able to retain the loyalty of a large number of customers who trust in its quality products.

Congratulations to the whole staff and we wish it another 100 additional years of success! 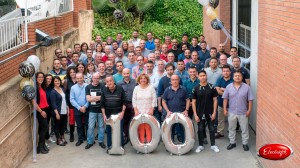