Recently, Electricfor's headquarters in Bangalore (India) celebrated its sixth opening anniversary in the purest Hindu style, with the so-called Puja - a prayer ritual primarily aimed at showing devotional worship to one or more deities or the celebration of an event spiritually.
To this end, and as tradition states, our colleagues in Bangalore offered light, flowers, water and food to their principal deity to thank those six years of Electricfor in India.

A six-year consolidation and success

The fact is that Electricfor Heating Systems India has been able to consolidate itself with a complete catalogue of electrical heating elements and heating equipment in the local Indian market. Thus, and during this period, it has successfully supplied the main Indian business sectors such as engineering, industrial machinery, hydraulics and renewable energies, among others.
Likewise, and thanks to its vast national network of sales and services, which also has extensive logistical support, it has been involved in large projects, contributing with the added experience of Electricfor's Spanish headquarters in the design, installation, start-up and maintenance of its products.
We wish them many more successful years! 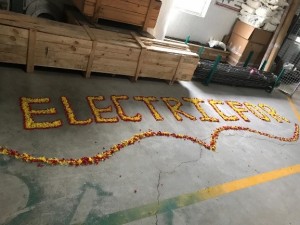